Trending
You are at:Home»Bike Rides»Bangalore to Mangalore on a KTM 390 Duke

In January of 2019, I was scheduled to go to Mangalore, Karnataka, for some work. Since it is just 350 km, instead of taking a train or a bus, I decided to turn it into a bike ride from Bangalore to Mangalore. Since I love the twisties, I also ended up taking the Hassan route and then onto Sakleshpur.

The plan was to cover Bangalore to Mangalore on Thursday, finish my work on Friday and enjoy the weekend, and head back on Monday. But, as luck would have it, my work spilt over into Monday, and we ended up going to Udupi as well. Here’s an account of what happened.

To get to Mangalore, you have three options. The first is the route via Hassan (350 km), the second goes through Hiriyur and the Bhadra Wildlife Sanctuary (480 km), and the third via Madikeri in Coorg (390 km). We took the Hassan route as that is the most popular one and the shortest.

What you do is to head out of Bangalore from Nelamangala and head towards Hassan on NH 75. The road up to Hassan is broad, straight, divided, and in good condition, making it the fastest part of the ride. After Hassan the road is not so good because it’s narrow, has potholes, and is under construction as part of a road-widening project.

Once you reach Sakleshpur, the road gets twisty, and on a nimble bike, the fun begins. You will catch glimpses of the river Netravati as you head down the road towards Mangalore. This road is generally good but be careful during the rains.

The ride from Bangalore to Mangalore should take you about 6 hours. The ride up to Hassan is fast but once you reach the ghats, you will slow down. The road between Hassan and the ghats will also slow you down a bit.

Places to eat in Mangalore

There are two places that you have to check out when you are in Mangalore or heading towards it.

Hotel Laxmi Niwas (KT Niwas) in Kalladka: This is a small pure veg restaurant that you will come across just before Mangalore. This place is known for its 2-layered tea – it tastes the same as normal tea, but is served with the tea concentrate floating on top of the frothy milk. 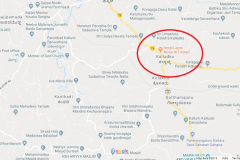 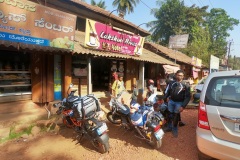 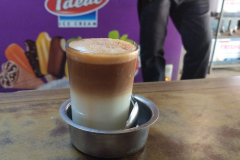 Once you reach Kalladka, keep an eye to the right; you’ll see a board with a picture of the tea in question. That is the shop you want to stop at.

Machli in Mangalore: This is a restaurant that serves some awesome Mangalorean food. We went there for dinner and tried the fish thali with a slice of fried fish and serving of crab ghee roast. All of which was finger-licking good!

The restaurant is in a small lane near the Passport office in Mangalore. It has parking available for both cars and bikes so you can drive/ride up to it in peace.

Things to do in Mangalore

Well, it’s Mangalore so it should come as no surprise that we ended up on the beaches. We first went to Panambur beach. It was ok, but we didn’t enjoy it much. I guess the entry to the beach being an industrial area with pools of black water all along the road put us off.

After Panambur we went to Tannirbhavi Beach, which was actually quite nice. This would be the place you’d probably go to if you wanted to get away for a while. After hanging around there for a while we went further down to Bengre beach. It is the last beach on that sliver of land, in line with Tannirbhavi. It’s not really a beach but more of a rocky platform from which you can watch the sunset.

Speaking of which, since I wanted to try and film the sunset, we headed back to another beach that we had passed earlier. This was New Tannirbhavi beach. It is located between Tannirbhavi and Bengre beaches.

The approach to this beach is through a grove of trees and is about 100 m long. All along the approach, you can see stalls selling food, snacks, and other little knick-knacks. The beach itself is broad and not crowded so you can find a quiet corner for yourself.

Having had a good time, we headed back to the hotel to rest up before the ride the next day.

The next morning, we got up, had a leisurely breakfast, and started packing the bikes for the ride to Udupi. I may not recount everything we did in detail here, but you can watch the video below to help you visualise the experience.

Since Udupi is just about 60 km from Mangalore, we were in no particular hurry to get moving. We had until 12 pm to check into our hotel. Once we were all packed up, we headed north along National Highway 66. The road is nice and wide. It also offers up occasional glimpses of rivers or backwaters. I couldn’t tell which, but it was fun riding.

Places to stay in Udupi 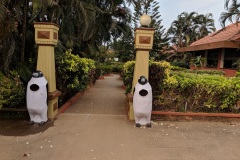 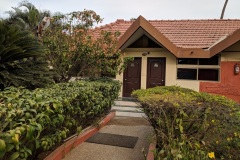 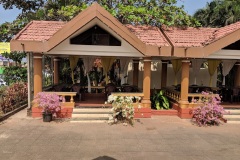 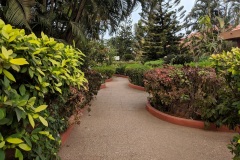 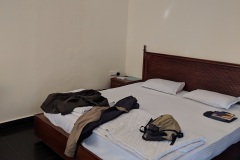 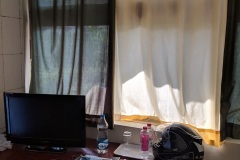 The place we booked was called Malpe Sea Front Cottage. It’s a nice resort that allows you to reserve a double occupancy cottage. It is located right next to the Paradise Isle Resort and is right on the beach, making trips to the sea very convenient.

Things to do in Udupi

Well, Udupi is famous for its temples like Sri Krishna Matha and Anantheshwara. Once you have visited the historical landmarks, you can spend the evening on the beach. The list of activities that you can do is quite satisfying because you can:

Since our resort was a part of the Paradise Isle Resort, we went to check out their in-house restaurant called Ocean View or something. It was a disappointment because it was overpriced, and the food wasn’t very tasty. A better bet is Seashells, the in-house restaurant attached to Malpe Sea Front Cottages.

The tables are all out in the open, so you get to see the sea and the beach. The food is really tasty and the prices, though not cheap, are not too high.

The highlight of the trip

The highlight of the Bangalore to Mangalore bike ride had to be Udupi. It was a completely unplanned extension of the ride, and we ended up trying something new too. When we were at the hotel in Udupi, we came across a poster that advertised diving. For some reason, my friend and I immediately decided to give it a try.

So, we made the call to the number mentioned on the poster. It belonged to West Coast Adventures who told us that they would be happy to host us for the dive. We set a meeting for early the next morning and set about the business for that day (checking out St Mary’s Island).

The next morning, we headed out to Kapu, where we were to meet the folk from West Coast Adventures. The map told us to take the highway back, but we saw a tiny sliver of land connecting Malpe and Kapu and decided to try it.

Trust me, it turned out to be the right decision because this sliver of land, hardly 100 m across, was dotted with peaceful looking fishing villages. The road itself was not good, but it had the sea on one side and a river on the other. What more could you ask for from a great morning ride?

The ride from Bangalore to Mangalore was supposed to be for work, but it turned itself into a good little vacation. And, I am glad we went to Udupi because, little did I know that in just a few months I would end up getting certified as a diver!

I am a someone who is always looking for an adventure. I am a certified open water diver, a trekker, biker and a travel addict. I have been travelling ever since I was a child and over the years, have collected a boatload of stories which I hope to share with you someday.